Tembotov Institute of Ecology of Mountain Territories of the RAS

The paper presents a comparative analysis of spatial localization parameters of coniferous and coniferous-deciduous forests in various landscape and climatic conditions of the Western Caucasus. During the study, we set the task of determining parametric variables that would reflect the most significant factors of distribution of coniferous and coniferous-deciduous forests of the Western Caucasus based on the synthesis of field and remote data. In 2016–2018, 76 trial plots for research and material collection were laid in the Western Caucasus. The research resulted in presentation of a typological scheme of coniferous and coniferous-deciduous forests of the research area, and identification of 13 types of forests, that are distributed into 7 groups. The forest stands in the studied forest types are mainly of different ages, multi-storeyed, highly closed, of medium or high density. Conclusions are made about the high accuracy of the spatial distribution model based on the parametric values of discriminant functions and average values of predictors.

One of the issues in the research of the forest ecosystems of the Northwestern Caucasus is the lack of up-to-date mapping of coniferous and coniferous-deciduous forests throughout the North Caucasus (Tembotova et al., 2012; Komarova, 2017) in general and in the Western Caucasus in particular. Identification of the typical features of spatial distribution of plant communities is relevant both from the practical of view (for monitoring and preserving biodiversity at all levels, planning economic activities, etc.) and the theoretical points of view (for establishing ecological parameters of species distribution and patterns of plant community’s formation).

For this study, the following objective was set: to identify the parametric variables that reflect the most significant factors of coniferous and coniferous-deciduous forests distribution of the Western Caucasus based on combined field and remote data.

The material was collected during expeditions and at the permanent monitoring sites in the northern part of the Shaposhnikov Caucasian state natural biosphere reserve (hereinafter the Caucasian nature reserve). Geobotanical descriptions were made and taxational characteristics of the stands were determined on the forest areas in the valley of the Malaya Laba river and its tributaries. Traditional geobotanics research methods and standards adopted in forest taxation were used in field research (Sukachev, 1961; 1972; Zagreev et al., 1992; Neronov, 2002). The Dominant species approach was the basis for forest cover classification in view of geobotanical descriptions results. In this paper, forest type of forest was understood as a type of biogeocenosis (Sukachev, 1964).

The size of the trial plot was 900 m2, which is generally equivalent to the standard pixel of Landsat multispectral survey. 78 trial plots in total were surveyed in the Western Caucasus in 2012–2015 and 2017–2018.

The scenes of average spatial resolution Landsat 8 OLI/TRS dated September 13, 2018 (scene ID: LC81730302018256LGN00) were used to assess the parameters of the current spatial localization, as it was the closest to the research period, and not covered with clouds. Regression and discriminant analyses and models of regression/classification trees (Puzachenko, 2004) were used for spatial analysis and test data interpolation. Further forest type classification and modelling, was performed through discriminant analysis at the estimated probability of occurrence (is based on the frequency of the forest types occurrence in the training sample) with the reverse step-by-step inclusion of variables at the level of F-test = 1. On the whole, high recognition accuracy (on average 95.5%), the regression coefficient values, and results of creating classification trees are the evidence of high predictive capability of both the training sample and the created interpolation model. Respective literature gives more detailed description of the research methods (Bartalev, 2006; Kozlov et al., 2008; Isaev, Chernen’kova, 2009; Tembotova, Pshegusov, Tlupova, 2012).

As a result of regression analysis of 86 remote sensing variables (Wood, 1996; Sandlerskij, 2013; Fick, Hijmans, 2017; McNally et al., 2017), which together characterize the vegetation and thermodynamic components and the morphometric characteristics of the terrain, 18 turned out to be significant (Table 1). High regression coefficients (R= 0.73; R2= 0.7114; accumulated R2=0.7144; F (19.43) =2929.4) should also be highlighted, as they indicate high predictive capability of these variables at modelling the spatial distribution of coniferous and coniferous-deciduous forests in the study area.

To make primary classification, we have constructed general classification and regression trees (GC&RT). The results of displaying of the importance of variables in the classification analysis (Fig. 1) in general are in line with those in the regression analysis, but here terrain parameters (altitude and slope direction), and vegetation indices (among spectral variables) turned out to be significant.

In the group of fern fir forests, fern fir forest of bonitet class II may be distinguished. The stand is dominated by Abies nordmanniana (Steven.) Spach, whereas in the second tier, Fagus orientalis Lipsky, Tilia begoniifolia Steven, Acer platanoides L., and Picea orientalis (L.) Link. can be found in small amounts. Crown closure is 0.8. The undergrowth is as good as absent. The ground cover TPC is 20–30%.

In the group of mixed-grass beech forests, one type of forest is identified, i.e. oxalis spruce-beech forest, bonitet class I. The stand is dominated by Fagus orientalis Lipsky and Picea orientalis (L.) Link. Tree canopy closure is 0.8. The undergrowth is absent. The ground cover TPC is 15–20%.

The spatial parameters for the identified forest type groups and specifically forest types are distributed as follows.

The group of mixed-grass fir forests.

Oxalis beech-fir bonitet class II forest occupies the largest area (7.604 ha, 19.6% of the forested area) of all the identified groups of forests; it is common at altitudes ranging from 600 to 2,200 m above sea level on the slopes of moderate steepness (15–20°) with the northern and north-western slope direction.

dead-soil beech-fir bonitet class II forest occupies an area of about 350 hectares on the slopes of moderate steepness (20–27o) with the eastern and south-eastern direction.

Impatiens beech-fir bonitet class II forest occupies an area of about 200 hectares with the southern and south-eastern slopes of moderate steepness (16-21°).

The group of fern fir forests. In this group, one forest type was identified in the study area, i.e. the fern fir bonitet class II forest which occupies about 12.5% of the forested area and can be found on steep slopes (about 30°) with the north-western direction.

The group of mixed-grass beech forests. In this group, one forest type was identified in the study area, i.e. the oxalis spruce-beech bonitet class I forest which occupies about 5 thousand hectares (13%) on gentle and moderately steep west-facing slopes (8–17°).

The group of fern beech forests. This is a group of forest types that is very common in the Western Caucasus, and, along with the group of mixed-grass fir forests, it is the most represented group in terms of the occupied area (about 30% of the forested area).

The spruce-beech fern bonitet class I forest occupies about 6 thousand hectares (16%) on flattened west and north-west-facing slopes (5° on average).

The group of fern spruce forests. This group is represented by one forest type, i.e. the fern beech-spruce bonitet class II forest which occupies an area of 2.9 thousand hectares (7.5%) on gentle south-facing slopes (9.8°).

The group of mixed-grass spruce forests is also represented by one forest type, i.e. the dead-soil beech-spruce bonitet class II forest which occupies a small area of 179 hectares (0.46%) on the gentle south-east-facing slopes.

The group of multi-storeyed pine forests is represented by the following forest types:

the mixed-grass oak-pine forest occupies an area of 643 hectares (1.66%) on the south-south-east-facing slopes of moderate steepness (22°);

the azalea oak-pine forest occupies 339 ha (0.87%) on the slopes of moderate steepness (28°) with the southern direction.

The mixed-grass hornbeam-pine forest occupies about 3 thousand hectares (7.8%) on the slopes of moderate steepness (17.5o) with the eastern and south-eastern direction.

The mixed-grass aspen-pine forest occupies an area of 2.2 thousand hectares (5.85%) on the south-south-east-facing slopes of moderate steepness (18°).

The largest area among the identified forest types in this model is occupied by the oxalis beech-fir forest type, the least represented are the dead-soil (beech-spruce and beech-fir) types (Table 2).

Table 2. Areas of the main types of coniferous and coniferous-deciduous forests of the Caucasian reserve

According to the developed model, the area of forests dominated by coniferous species in the research area is 38.8 thousand ha (14% of the study area). They are mainly confined to the steep (25–30° or more) northern and western slopes (60–70% of the area of the slopes of these directions), with altitudes ranging from 1.000 to 2.000 m above sea level.

In the future, the classification typological scheme of coniferous and coniferous-deciduous forests of the Western Caucasus will be expanded and specified. Also, the obtained parametric values of the discriminant functions and the average values of predictors allow using them in the future when recognizing and classifying forest types from the previous period images to develop a model of the spatial and temporal dynamics of the Western Caucasus forests. 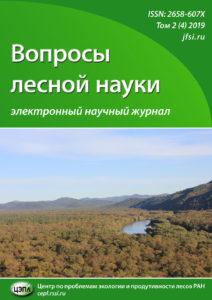